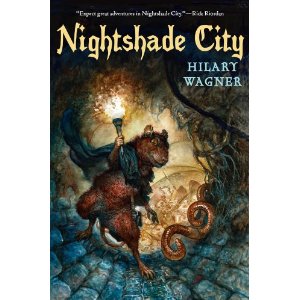 Okay, I am falling way behind schedule, but it's spring break and my kids are home.  Need I say more?

For day 3 of the Hop! Plop! Birthday Bash, I am giving away NIGHTSHADE CITY by Hilary Wagner.  Can you believe this exciting underground MG adventure started out as a picture book?

Hilary is here to tell us about it in her own words:


When I got the idea in my head to write Nightshade City, it started out far different. I was pregnant with my daughter Nomi (who at the time we were told was a boy), so I thought wouldn't it be great if I wrote a picture book for my two sons! Vincent was about five at the time and my baby on the way was going to be called Victor. If we have another boy anytime soon at least we already have the name picked out!

So, I started writing. The story began on a roof top of an old apartment building in a dilapidated city, two bony rats brothers, shivering close to each other on a dark and stormy night. *insert record screech here* Hmmm...two emaciated rats in an old dirty city on a dark and stormy night...that didn't scream picture book to me, especially when the owl comes after them moments later!

At that moment, I realized (quite clearly) I was not meant to write picture books. I adore them and buy way too many of them for Nomi--two now--and a total bookavore! I think writing picture books takes a special kind of knack, just like novels do. You either have the talent for them or you don't and just because an author can write a string of bestselling novels, don't think picture books are easy peasy to that same author--total myth! Last year I saw literary agent Michael Stearns speak (who has this awesome dry sense of humor) and he said (I'm summarizing) that many picture book writers move on to novels, but it is rare for a novelist to move on to picture books--at least good ones! He was certainly right in my case.

Just a few weeks back, I finished KINGS OF TRILLIUM, Book II in the Nightshade Chronicles and now I'm working on a second series. I'm so hooked on novels. I can never see myself moving into picture books. I'm just not built for them! For now, I'll just buy Corey's! Nomi can't wait for Three Ninja Pigs!!!! ;)

All you have to do to enter is be a follower and leave a comment. (You must also reside in the U.S.)

I loved Nightshade City and can't wait for the next one. My current chapter book began as a PB, too. Some stories just want to be longer, don't they?! :-)

I'd love to read Nightshade City! I'm a follower! Thanks!

Oooooh, I have a "picture book" idea that seems to be coming out longer than a Picture book. I may need to read up on middle grade novels!

Would love to read this one and I bet my son would enjoy it too!

Been wanting to get my claws on this book! Great giveaway. Thank you!

Thanks for having me today, Corey! Book II just went to Copy on Tuesday and I just got a sneak peek at the final cover! It is so amazing--even better than the first! I'm so excited for the THE WHITE ASSASSIN!

Thanks again to you and everyone!

Would love a copy of your book!

This is a great interview!

I like the way the story starts -- two bony rats on a rooftop. Interesting how the story chose its own genre.

BTW, Corey, I'm following you twice. You can delete the first one (the pic on the right) if you want. I had to follow again to add Thing 1 and Thing 2 to my blog reading list.

I've been dying to read this, so sign me up!
My Blog

This is one I'd like to read. I've heard lots of good things about it.

I loved Nightshade City too...I can't wait for Hilary's next book to come out. :)

Well, I live in Canada, so I can't enter. But I enjoyed reading this story of how NIGHTSHADE CITY came to be! What you said about picture bookers often making the switch to novels but novelists having trouble making the shift to picture books intrigues me. I wonder what can be said for people who are trying to do them both at once? :-/

I've followed Hilary through her relationship with Jen Blom - and their possum vs. rat wars. :)

(of course, if we win it and love it, we'll probably buy it for our friends!:) )

Sounds like an interesting story! I bet my big ballerina would like it. I love hearing the background about how it came to be.