Reasons to Go To Conferences- Part 1 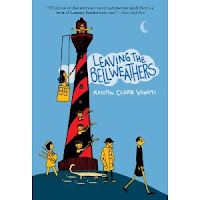 Okay, we all know there are TONS of reasons to go to conferences. But it is always nice to hear specifics rather than generalities.

REASON #1 - You could get an agent

Tracey Adams was critiquing conference manuscripts. Most of them were pretty crappy. But then she picked up one called LEAVING THE BELLWEATHERS. She read the first paragraph:

It is nighttime in the village of Eel-Smack-by-the-Bay. All is quiet except for the chirp of crickets and the occasional moist ribbit of a bullfrog. A slanted yellow patch of lamplight shines through a window and rests softly on the grass. Certainly there is nothing in this peaceful scene to hint that pandemonium is likely to break out at any moment. On the third floor of the Lighthouse on the Hill an upright man sits in an upright chair. at an upright desk, up writing in his diary.

Tracey knew on the spot that she wanted to represent this writer, Kristin Venuti Clark!

She sold this fabulous quirky novel to Regina Griffin at Egmont, and the sequel THE BUTLER GETS A BREAK is now out.
Posted by Corey Schwartz at 9:28 AM
Email ThisBlogThis!Share to TwitterShare to FacebookShare to Pinterest

Oh how I love, love, love this book! Must get the second! Thanks, Corey. I didn't know it was a conference sub.

Defininely a good reason to go to a conference. Waiting to hear your other reasons.

a new layout? love it!

That first paragraph is quite amazing. Oh wow.

That's great! I'd love to go to one someday. We have a local one in MT, but it's a good 6-7 hour drive from here. Montana = big state.

That just makes me feel happy. The anecdote and the book.

That is awesome. I've heard a lot of stories about writers getting "discovered" at conferences. It seems like a pretty good way to get your writing out there.