Guess What I Found in Dragon Wood? 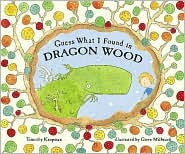 I have new favorite picture book! And guess what? It's British. Shocker, huh? (For those of you who don't know, I am a total Brit-wannabe. I even sent out a manuscript to Little Tiger Press last week.)

A dragon finds a little boy in the woods and brings him home. This book had me at "It's called a Benjamin." (p. 2) The dragon's mom cooks the Benjamin a delicious meal of worms, but "it turned out, it wasn't hungry." The dragon then takes the Benjamin to school where his friends find it endlessly fascinating. "Instead of breathing fire from his nostrils, it leaked water from its eyes!" I read this book to my four-year-old daughter, and it cracked us both up!

Timothy Knapman's execution is brilliant. I have tried to capture this exact tone in some of my stories, but I have never been successful. I guess that's because I wasn't born on the right side of the ocean.
Posted by Corey Schwartz at 5:07 PM
Email ThisBlogThis!Share to TwitterShare to FacebookShare to Pinterest

I love so many things British. What is it about them Brits?

The book sounds darling. I might have to get this for me, I mean my kids.

Do you shop on Amazon UK or was this something you found in a bookstore where you live? Looks great!

Oh goody! You got it! (To answer Christy's question, the book was a recommendation from me. I had found it in our library and my kids loved it so much, I bought it for them this Hanukkah.)

I love love love this book. So much fun. The story, the illustrations, even the cover is unique with its cut-out.

Laura - Are We Nearly There Yet Mummy? said...

I think I might go out and find this book - it looks great!

Tara, thanks! Should have given you credit!

Christy, I got it on plain old Amazon. I don't totally understand how it works, but I think it was originally published by Puffin in he UK and then Bloomsbury USA bought the rights?

Laura, I checked Amazon UK for you. I think you can only buy the paperback.