The HICCUPotamus, Part 1- and a Signed Book Giveaway! 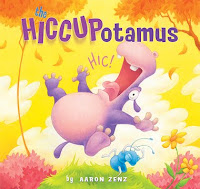 Aaron Zenz, author and illustrator of The HICCUPotamus, filled me in on a little secret. He is not a huge Seuss fan. He felt bad about admitting this publicly, especially because The Hiccupotamus so often gets compared to Seuss. (I, myself, did it here)

But he does LOVE nonsense!

Here's what Aaron had to say on the subject:

I don't like rhyming for rhyming's sake. I really think if a story *can* be told without rhyme, then it *should* be. But I DO love nonsense. Love it, love it, love it. I think Lewis Carroll's "Jabberwocky" is the best thing ever written. I had a sense of accomplishment as a kid when I memorized it -- like I had mastered a secret language. I'm drawn to nonsense. Most of the things I've written involve nonsense -- either utilizing nonsensical words or simply starting with a nonsensical premise.

"The Hiccupotamus," rhymed only because it was essential in creating the nonsense words. "There was a hippopotamus / Who hiccuped quite a-lot-amus / And every time he got'emus / He'd fall upon his bottomus." I really had no interest in telling a story about a hippo with the hiccups getting chased around by a bunch of different animals. But I was enraptured with the idea of writing a story with words like "Cementipede" and "Wellephant" and "Quickerish" and "Nightmareapy!"

Jargon has a very nonsensical feel to it. Also coming out this month is a book I illustrated called "Nugget on the Flight Deck," written by Patrica Newman. While I was not thrilled with the idea of drawing pictures of aircraft carriers and jets (not my thing), I loved the fact that the book was filled with cool naval-speak like "zero-dark-thirty," and "put on a zoombag" and "bingo to Mom" and "401 plugged and receiving." Great stuff!

I have another manuscript I'm hoping, hoping, someone green-lights soon about baby animal names. We know about puppies and kittens and cubs. But there are also great baby animal names like pinkies, squeakers, leverets, and elvers. I love that!

Also, if "Hiccupotamus" manages to do well, I have a sequel that I'm hoping someone somewhere would like to publish called "The Chimpansneeze." It's also loaded with tongue-fun nonsense words. Any publishers reading this? Any takers? Eh?

The Chimpansneeze? Sounds hilarious. If I were an editor, I'd grab it!

Okay, we have more Aaron Zenz coming tomorrow. In the meantime here is the GIVEAWAY:

One lucky winner will receive TWO SIGNED copies of The Hiccupotamus (one for you and one for a friend.) Just leave a comment on this post telling us your favorite nonsense word. Come back and leave one on tomorrow's post for a second entry. (Open to U.S. residents only)
Posted by Corey Schwartz at 9:05 AM
Email ThisBlogThis!Share to TwitterShare to FacebookShare to Pinterest

Okay, I can't enter, but my favorite nonsense word came from my four-year-old son when I asked him what he thought of The Hiccupotamus: "It's very RHYMISH."

My son LOVES coming up with nonsense words lately, and he cracks me up. His latest is "Habeedodaddy!" He is also quite fond of "DaddyPooPoo," which I must admit amuses me immensely, but Daddy seems not to want to encourage.

inkish: for when you're feeling tired and down

slurprise: for a surprise with a twist. I'll say, "It's a slurprise."

blobbily: for willingly. She'll say back to me, "I'll blobbily do it, Mom." (adding an english accent helps this particular word for some reason)

free book - hooray! Thanks for hosting this contest, Corey :)

It was raining one day and my (then) three-year-old daughter Sallie put on her rainboots and declared that she wanted to go outside and play in the "muddles".

My dh and I have nonsense word that started in our highschool sweetheart days: THROMISE which is a combination of Threat and Promise. "Is that a threat, or a promise?" "That is a THROMISE!"

This may not be as funny unless you realize this came from a NINE YEAR old!

My daughter was reading to me and she came across the word "eyebrows". She is a straight A student and a good reader so I was shocked when she stopped and asked me what the word was. I looked at her and looked at her thinking surely she could read the word. Finally, I said, "eyebrows".

She stared at me as if I was speaking a foreign language. I stroked my own eyebrows to show her what I meant. She looked at me and the light bulb went on..."EYEBROWS?!?!" she said, "I always thought those were called eyeGROWLS"!

We are big fans around these parts of nonsense numbers. To pick one (and sorta keep with the animal theme)? Squidillion.

This book sounds awesome, and I love the illustrations. :) My favorites are the ones my kids come up with: monksters, tabie, and the one from Jabberwocky: brillig--that just feels wonderful rolling off the tongue. Brillig. Brillig. Brillig. :D

Ooh, kids are great at making nonsense words. And they love books with nonsense words. My favorite one: volves. My son said it. I asked him what it meant, and to use it in a sentence. (He's 11.) He goes, "Like, those volves are running fast. Like 'wolves' but with a German accent."

OMG, my kids would LOVE this book. They love making up weird words for things...their favorite by far is calling chaptstick Nu Nu. It's weird I know. I think it started because they thought chapstick looked like Nu Nu's snout on Teletubbies.

OMG, these words are amazing! I'm so glad I asked!

Sloops = the milk left over in your bowl after eating cereal. As in, "Drink you sloops, don't waste that milk."

Oh, Heidi, another great one.

Just want to be clear. I am not picking the BEST word. Just drawing at random. But I do LOVE hearing all of them!

We have so many nonsense words in our house we use them in regular conversations with "outsiders" forgetting that they're only real to us! Most of them are mispronunciations from when the kids were small. "Cocorn" for popcorn, "Eyeslavers" for Lifesavers and my favorite, "be-out" as in, "Don't leave be-out me!"

I love all of the nonsense words in Dr Seuss books. I don't have a favorite!

Dear lord, I memorized Jabberwocky, too!

These nonsense words are hilarious. Mine is surfiesta (it's a surfing party.....yeah, I'm writing a book with this title).

My favorite nonsense word is "oof." In our family, "to oof" means to eat WAY too much (for example, "whoa, I really oofed at that buffet." Sometimes we refer to birthdays as "oofdays."

Thanks for a great interview with Aaron!

Just have to say I love "muddles" and "eyegrowls". LOL. Calipiters for Caterpillars. We've said it so much the wrong way, sometimes I have to stop for a second before I say it!

One of my favorite nonsense words is "geeber," which is a cross between "geek" and "goober." For some reason, my family has always loved blending words to make new ones.

NIMPLES! It's been a favorite in our house ever since MonkeyKid said it as a toddler. What does it mean? Let's use context clues, gang! (Upon being lifted out of the bathtub one chilly winter evening): "Mommy, it's cold in here! My nimples are sticking out!"

This looks so cute. I love the nonsense words!

Gosh, I'm not sure what my favorite is! How about a recent favorite? My daughter's newest word-twister is "planecopter." Whenever she hears a plane or helicopter flying over, that's what she yells. So cute!

my favorite un-dictionary word is BAMA
because it's what my grandkids called me
when thay tried to say grandma....and it stuck.

I love Jabberwocky too, so my favorite nonsense word is Bandersnatch. In fact, every single one of my computers has been named The Frumious Bandersnatch. I think I'm on FB the fourth now.

it's so interesting to me....the whole "don't write a story in rhyme if you can write it without rhyme". i've heard that often, and i just can't be sure whether or not i agree. on one hand, it scares me (i live for rhyme), on the other hand it confuses me (i can think of 50 rhyming books that didn't HAVE to rhyme, but i'm SO glad they do!), and finally it forces me to really, truly think about WHY i am rhyming in the first place, and what does the rhyme actually bring to the story. EEK! back to scared again. lol!

I am the queen of nonsense words.. Often when talking I join works together and they make sense however, my sons favorite word is Googly moogly and one that I have no clue how to even spell... weeshenanigans (at) gmail (dot) com