Jill Myles- To Sequel or Not to Sequel 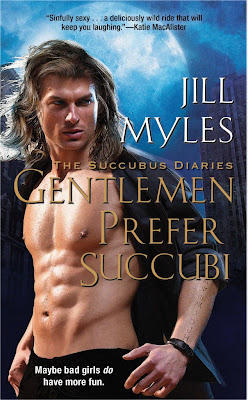 I think as writers we all dream that our book will turn into a series. Am I right? Well, for Jill Myles the dream has come true.

We get to take a behind-the-scenes look at how Jill's debut book became the first of many in THE SUCCUBUS DIARIES.

Jill, welcome. Can you give us a time line of when you wrote books 1, 2, and 3 and when you got offers on them?

Book 1, GENTLEMEN PREFER SUCCUBI, was conceived and written in 2005. I cleaned it up, shopped it around and got an agent in early 2006. From that point on, it was a waiting game. 2006 was probably the longest, most angst-riddled year of my life up to that point. It paid off, though - in early 2007, we got an offer on Book 1, and the publisher wanted to know if it was a series. At this point, I'd never written a sequel, though I had ideas for further adventures involving the same characters. My agent suggested that I put together some ideas for Book 2, so I wrote one paragraph and sent it off to her. She came back to me and asked for a real live outline. Oops! Who knew. ;)

NOTE: I am embarrassed to admit that I wasn't familiar with the term "pantser," so I had to look it up. Apparently, there are plotters and pantsers. Plotters outline. Pantsers have no plan. They write by the seat of their pants.

At that point, it was a little trickier for me to come up with a plot concept - I had given my agent the high level pitch, but to actually think the story out was a lot trickier. I'm very much a pantser, so this was a new concept to me. It took a few rounds of discussion and writing out ideas, but I eventually came up with a one page outline for book 2 (a whole page!) and we sent it off to the publisher, who accepted it.

My book got pushed out to 2010 (due to a format change) so the rest of 2007 and most of 2008 involved a lot of waiting. I wrote book 2, SUCCUBI LIKE IT HOT, turned it in, and waited and waited and waited. My book finally came up on the schedule in early 2009, so I spent most of the last year doing revisions and copyedits and galleys for both books in a row, as well as prepping a proposal for book 3. My editor asked to see a proposal for book 3 in June or so of 2009, and we had a confirmation that they wanted it a few weeks later. I'm still writing book 3 at the moment (deadline March 1st!) so after that, I'll start thinking about book 4.

Many authors want to start writing a sequel before they have sold their first manuscript. What is your advice to them?

I think that starting a sequel before selling your first manuscript is a bad idea. I've had 3 agents and all 3 have agreed - don't write the sequel until you have a contract in hand and the OK from your editor. I've known writers that wrote a connected trilogy before finding an agent...and then the agent was not able to sell the books. At that point, you have 3 dead manuscripts on your hands instead of just one. And a lot of editors might like the writing but not necessarily the story, and will say "Got anything else for me to look at?" Book 2 of a trilogy won't cut it.

Another thing to think about - editorial input. Your editor might love book 1, and hate the concept for book 2, which means starting from scratch. When it came down to book 3 for my series, I sent a proposal to my editor - 50 pages and a lengthy synopsis. My editor then pointed out all the things she didn't like in my synopsis and wanted me to change. I rewrote it and made some suggestions on plot, and we went back and forth a few more times before cracking down on the final plot. It's easy to change mid-stream if all you have is an outline -- not so easy if you've already written the darn thing.

Wow, Jill, thank you so much!

Before you go, be sure to enter Jill's contest! Her fabulous agent, Holly Root, is offering a query critique for one lucky winner drawn at random. Leave a comment here and you'll earn one entry for the drawing. Comment at each of the other blogs on Jill's tour to earn additional entries.

Jill will pick the winner on January 27.
Posted by Corey Schwartz at 9:10 AM
Email ThisBlogThis!Share to TwitterShare to FacebookShare to Pinterest

Great interview! That cover is hot!

Thanks for the interview- interesting stuff !

Great advice. I loved the interview! I have two series and have yet to sell them but I did have a blast writing them.

It's hard to resist the lure of writing book after book of the characters we love, but writing sequels when the first book doesn't sell isn't going to get you published. Thanks for the reminder!

Thing One: Good tips on writing sequels. I have an idea for a second book/series, but now I think I'll wait to actually write it.

Thing Two: Is there something in between a pantser and plotter?...'cause I think I'm a plotser (I start with an outline, but end up going by the seat of my pants).

P.S. I have a pic of Thing One and Thing Two over my writing spot. That's gotta mean something, right? :-)

Great interview...I will be sure to throw the word "pantser" around everywhere.

More great advice! Thanks, Jill. I'm really getting a lot of good information from this tour.
Margay

Great interview, Corey and Jill. I especially found the sequel comments interesting. And what a cool prize: a query letter critique! Pick me! Pick me! ;)

I liked this interview a lot. I'm taking a class right now with Kendra Levin from Viking and we have to write an outline before we start. It is KILLING me! I'm a total pantser. Believe me, I see the value in it, but it is SO hard!

Great interview! And wouldn't i love to hear -- "can you make this into a series?"

I'm sooo bad about falling for my characters. The next book is always bouncing around in my head before I finish the one I'm on. I think that's why I'm incapable of writing a short story. Thanks for the great advice!

This needs to go up on a sidebar. It's a very easy but good explanation of why not to write a six book series before you have a contract. And I'm a total plotter!

i've never written a second book to my manuscript, not matter how much i love the characters and tempting it may be. At first, I'm upset about it but then I start writing a new book and fall in love with it, too.

p.s.--succubi is the plural form of a succubus ( i think). you know the whole sex for your soul thing : )

Wow! This is a great interview. The book looks like a lot of fun!

Great interview Corey! Thanks for all of the advice Jill--especially the writing of sequels since we are about to embark on that journey.

Great interview, Corey. It is fun to read about someone who tells the straight stuff.

That sure is a memorable cover! And I found this interview informative and fun. Thanks, Jill and Corey.

awesome interview!!! thanks for your insight on the topic, jill!

Interesting interview with great advice. Thanks to both of you. And that cover ... wowza.

I know sequels are popular in fantasy, so it's good to know how to handle them. Thank you for another wonderful interview.

Great insights about sequels! I'll have to remember that. Thanks for the interview guys. Lots of fun.

Awesome interview and good information on sequels. I guess that means I shouldn't write the sequel to my WIP yet, huh? Good to know!

I'm curious to know how much say editors have over the plot of a book in that synopsis stage. Who has the final say?

Another good interview, got me thinking :)

I love reading about authors' journeys. Thanks for the great interview!

Great interview, thanks so much for the great info!