Reasons to Go to Conferences- Part 3 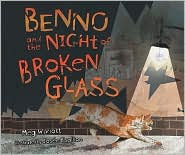 REASON #3- You Get the Inside Scoop on What Editors Want

For this one, I bring you Meg Wiviott, author of the beautifully written picture book, BENNO AND THE NIGHT OF BROKEN GLASS. The following is Meg's story in her own words...

Successful writers don’t just wake up one morning and decide they are going to write a picture book. At least I didn’t. I got the idea for BENNO AND THE NIGHT OF BROKEN GLASS roughly eleven years ago at an NJ-SCBWI conference when a well-known editor from a well-known publishing house said the one project he’d like to see come across his desk was a picture book on Kristallnacht. The gasp in the room was audible. A picture book on the beginning of the Holocaust – how does one do that? It took me about seven years to figure out how.

That is not to say that I thought constantly about this project for seven years. It stayed in the back of my mind and occasionally I would pull it out, play with it, mull it over and then push it back into the recesses of my mind. I finally decided that the way to do it would be by staying neutral, by just presenting the facts. My first attempt was a poem (Yikes!), outlining the events of the infamous night of November 9, 1938. My idea was to tell a simple narrative story and use sidebars to give the historical facts so that younger children could enjoy the story and have the facts available to them when they were ready. I took Version #1 to my critique group, who in their always kind and supportive way, said it was boring. Without there being a character readers could latch on to and sympathize with, the story had no heart. They were right. They suggested I tell the story from the point of view of a child. But I couldn’t do that.

I sent the manuscript to the well know publishing house, but I did not send it to the well-known editor who’d originally asked for the story. Instead, I sent it to a young editor with whom I’d had dealings with in the past. After about nine months of silence I sent a letter to follow up. I got an email from a different editor telling me that the editor to whom I’d sent the manuscript was no longer with the firm, but he was taking over all her work so if I wanted to send it to him he would “put in on the fast track.” Which I did but he didn’t. After another ten months of silence, I asked the second editor to return the manuscript. There were other houses I wanted to submit it to and at the time I was still doing exclusive submissions. I then sent the manuscript to another editor who responded that although she liked the idea, it was too graphic. She was right. So I took it back to my critique group and toned it down and then decided to attend the November 2006 Jewish Children’s Book Writers and Illustrators Conference. At this conference, I signed up for a 15-minute critique session with Judye Groner, Editor and founder of Kar-Ben Publishing. Having attended several similar editor/agent critique sessions, my experience was that the person giving the critique usually had a lot to say. But Judye had little to say, so I came out of it feeling quite sorry for myself. The next day I got an email from Judye encouraging me to make the few changes we had discussed and resubmit to her. I submitted the revision and Kar-Ben, six months later, bought the story.

My road from concept to contract was particularly long. Mostly because of the time it took me to figure out how to tell such a difficult story. But, I needed that time to sort through the ways of telling such a difficult and sensitive story.
Posted by Corey Schwartz at 3:24 PM
Email ThisBlogThis!Share to TwitterShare to FacebookShare to Pinterest

Occasionally I'll see editors post very specific wish lists and I always wonder if that pays off!!! But I guess the whole thing is that it challenges us to do something different, which is what you did. Sounds like it paid off in the end!

Thanks for sharing this story. It really reminds me to stick to my guns and keep working hard.

Congratulations on getting Benno's story out there!

Thanks for sharing your story. I think it shows your passion, tackling such a difficult subject and working so hard to see it published!

Kudos to you for choosing such a difficult but important story.
And thank you for showing us that it's not all easy going along the path to publication. An important lesson!