Quacky Baseball- The Story Behind the Story 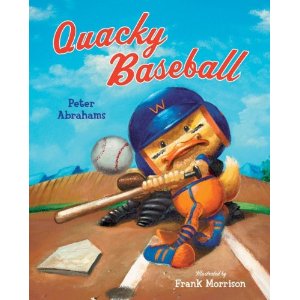 Peter Abrahams is on deck to share the genesis of his new picture book, QUACKY BASEBALL.   Peter is a New Your Times best-selling author of 25 novels.  QUACKY BASEBALL is his first creation for the 3-8 crowd.  Young baseball fans will love this nail-biter!


Back when I was writing the Echo Falls mysteries (a middle-grade series for Harper), I was hit by a sudden and unexpected idea for a picture book. It arrived in the form of the title – Quacky Baseball – grew in minutes to a whole history of baseball starting from caveman times, and culminated in a ninth-inning nail-biter; all the players would be ducks, meaning there’d be cavemen ducks, which I was eager to see. I called my editor and told her the idea. She said it sounded interesting: “Write it up.” I wrote it up that very day – not many words in a picture book! – and a contract was drawn up soon after.

Time passed. My editor left and I began working with a new one. Frank Morrison was brought in to do the art. I checked out his work, loved it. Soon we discovered there was too much story. I cut out everything but the most dramatic and action-oriented component, meaning the nail-biter, Quackers versus Webbies. Those cavemen ducks? They’ll have to exist only in my mind. I came up with names for the players (I’m very big on getting the exact right names for characters in my work) such as the little hero, Thumby Duckling, and his teammates – Flakey Duckstein, Manny El Pato, Medwick Ducky (an inside-baseball joke I’m not sure anyone has gotten yet), and the others, all brought beautifully to life by Frank. My editor left and I began working with a new one. Yes, again: this is the kind of thing you have to get used to in publishing. I made a few last tweaks of the text to better match the final pictures, then put my feet up, smoked a cigar and retired to an assisted-living compound in Florida.

All of the above guaranteed 100% true (except for the cigar and Florida part).


Peter, thanks so much for stopping by!

Visit the rest of the stops on the QUACKY BASEBALL tour.

Comment here, or on any blog stop, for a chance to win a signed copy of the book.

From My Easy Chair said...

I hope Peter can write the caveman ducks as a prequel. Sounds awesome!

I'm looking forward to reading this nail-biter. I would like to see how a cave-man duck would look.

Can't wait to read this one ... it looks so cute and sounds like a really fun book!

Thanks for hosting this, Corey! Really interesting post, Peter. Baseball books are ALWAYS popular at the bookstore where I work.

Ducky was Joe Medwick's nickname, right? Something to do with the way he walked?

I'd love to win a copy of this!

Corey, great idea to do a series on the story behind the story. Very funny, Peter.

The creative process fascinates me. It's so interesting to see how ideas evolve -- from concept through publication -- all the way to Florida compounds.

Corey and Peter, it's fascinating to go behind the scenes and see how this adorable book came to be. Nice!

Peter, it sounds like you've written a wonderful book that kids will adore! Best wishes with it. :-)

He makes it sound so easy! It's such a cute book. I can't picture it with the cavemen ducks, though I hope they reappear in another PB. Sounds fun to me. Thanks to you both for the behind-the-scenes interview.