NINJA RED RIDING HOOD- What the Kids Had to Say

The first NINJA RED RIDING HOOD reviews are in!  They are not from Kirkus.  They're not from PW. They are from an awesome bunch of third graders who live in Alberta, Canada.  This class got an F&G (an unbound review copy) and quickly realized that the wolf is the same one who appeared in THE THREE NINJA PIGS. 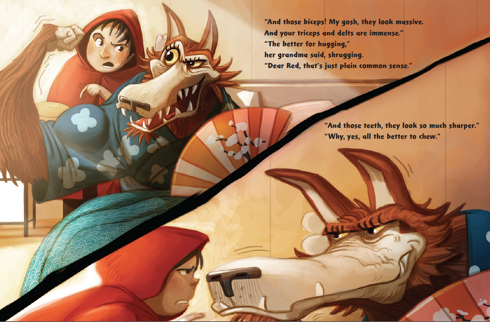 Here are their comments:

"This is seriously one of the best books I've ever read.  The author needs to make more of these!" - Nolan

"The page where Red Riding Hood comes out of her cape and becomes a ninja is the best surprise!" - Dyson

"I think the illustrator was really smart.  He used the same animals from the end of the Three Ninja Pigs at the beginning of Ninja Red Riding Hood."

"I wonder what the next Ninja book will be?  Goldininja?" - Gage

"Dan Santat has a great imagination.  But I wonder why the wolf wasn't fatter in the The Three Ninja Pigs?" - Carter

"The best part was when the Wolf was 'achin' for bacon'!" - Arland

Note: No children were offered bribes in exchange for favorable feedback.

Ki-ya!
Posted by Corey Schwartz at 7:51 PM
Email ThisBlogThis!Share to TwitterShare to FacebookShare to Pinterest

I'm sure it's wonderful, because you're an excellent writer, Corey!
Wish you all the best, success and happiness!

"Juicy words." What great praise! And so nice they took the time to write to you. They've got us all drooling, waiting for our chance to read!

Ha ha! Of course no bribes were offered. You don't need to with your books.

Those are some smart kids. I like the juicy words quote.

What a fun post! I love all the kids' comments. :)