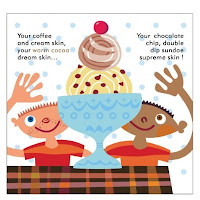 When my son was two, my husband went to pick him up from the babysitter at the gym and was informed, "Your son dropped something and said 'F*ck it.'" We were embarrassed, but not terribly shocked. My husband curses whenever someone vomits all over the place which is fairly often at our house. I, too, have been guilty of letting some bad words slip out now and then. We vowed to be more careful, but we were relatively unfazed. "It could be worse," we told each other. You might be thinking, "What could be worse than the F word?" Well, I'll tell you.

Today, my son, who is now three and half, went on his first play date without me. His friend Emily's mom picked him up at school and brought him over to her house. I got a phone call. Josh apparently told Emily's housekeeper, "I don't like your dark face."

I am completely mortified. I have no idea why he would say or even think anything like that. We don't live in a particularly diverse part of NJ, but he visits Manhattan regularly. He takes Spanish classes. He has his own Obama T-shirt.

We will certainly be reading The Skin You Live In tonight!
Posted by Corey Schwartz at 6:17 PM
Email ThisBlogThis!Share to TwitterShare to FacebookShare to Pinterest

Corey, don't read too much into it. Kids will be kids.

Come on over to my house! I think 50% of my daughter's class is from outside the US, and her teacher is in a wheelchair. It is probably the most wonderfully diverse class I've ever seen.

Oh, man! I remember seeing a show called Kids Say the Darndest Things with Art Linkletter when I was really little. You never know where they come up with this stuff.

I love that your son has an Obama shirt of his own.

Corey,
This week my five-year-old son said that he had "gone on a panty raid." My husband and I were like, "What? What did you say? Where did you hear that from?" A Drake and Josh episode, maybe? I mean, he should not be going on a panty raid for at least another 13 years.

My daughter and I were in line in the post office when she was 3. She pointed at the man in front of us and said, "Mommy, that man is black!" I thought I would die. The man was very nice and smiled. I told my daughter that yes, different people had different skin colors - even her best friend, which apparently, she hadn't noticed.

She was two when she first said, sh*t. We were driving in the car, she was bundled in her car seat in the back. There was a bag of groceries on the seat next to her and when we turned the corner it tipped over, spilling groceries all over. That's when she said it, "Oh, sh*t." My husband almost wrecked the car. We were happy she used it in context.

I share these stories to let you know it happens to all of us. My daughter is now 22. She graduated from college and has a real job with a salary she can live on. She is an intelligent, sensitive, independent, and Obama-supporting adult.

I think kids do these things just to test their parents.

Kids have a way of doing stuff like that. Don't sweat it. most people know kids don't know what they're talking about.

Thanks for stopping by my blog! :0)

Kids do just say the oddest things, mostly at the wrong time. My daughter, J, has the habit of saying whatever pops into her mind and I don't really want to regulate her to much yet sometimes it is mortifying!!
This to shall pass.