I Need My Monster- Road to Publication 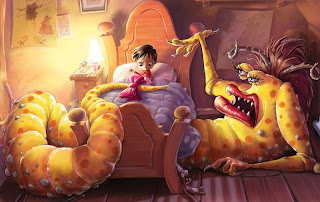 I’ve spent my life reading children’s literature, first as a child, then as an Elementary Education major in university, and also a mother of four.

I’ve had many bumps and bruises on the path to publication. I started writing for children when my oldest son was about three years old (he’s fifteen now). It took several years of constant writing and critiquing to find my own style and voice. It was also a trial and error process to find a critique group that suited me. Finally, with all the big pieces in place I was able to write a story I was confident would sell.

The initial idea for I Need My Monster came when I couldn’t keep my three year old daughter in bed. I’d just given birth to our fourth child and I desperately wanted everyone to sleep through the night. One night when the three year old was out of bed, again, I wished she had a monster to keep her in bed. It wasn’t my finest parenting moment, but something good came from it.

I wrote the story in 2005 and started submitting it later that year. I got some good feedback from editors and an offer to read revisions from a large company about the same time that Flashlight Press told me they were considering it for publication.

I decided to go with Flashlight Press because I liked their style, and I loved my editor Shari Dash Greenspan. She made the whole traumatic process bearable. I had no idea how much revision goes into a picture book!

During all the waiting I was still getting rejections. I even go a form rejection 2 days before my book was released even though I hadn’t submitted it to anyone in more than 3 years.

During the years of rejection I had to believe in my writing and my book. It was difficult when everyone seemed anxious to tell me I wasn’t good enough.
Posted by Corey Schwartz at 8:21 AM
Email ThisBlogThis!Share to TwitterShare to FacebookShare to Pinterest

OMG--A rejection just before release?! Classic! I think I would have laughed my head off at that one...and framed it!

Wow. That was more than inspirational. Thanx!

Yes, I agree. Fascinating story. And look... I was able to obtain one of the fabulous illustrations from Howard McWilliam.

Great success story! (And that illustration is fantastic.)

I love the last part about believing in your writing and your book. That is beyond true. Thanks for sharing!

Oy, it takes a long time!!! But the book looks wonderful. I got a string of rejections right after I signed with my agent, so I can totally relate. Rejection sucks.

That is a great story. Thanks for sharing--very inspiring.

Thanks for sharing Amanda's story, Corey! It's very INSPIRING! :)

Love that illustration! Can't wait to pick this one up!

I love monster stories. They have endless possibilities. Just when you think it's all been done before, along comes something like I NEED MY MONSTER. Gotta pick this one up.

I adore the illustration and love hearing the publication story.

Great concept! Thanks for admitting to one of those parenting moments. I think we can all relate.