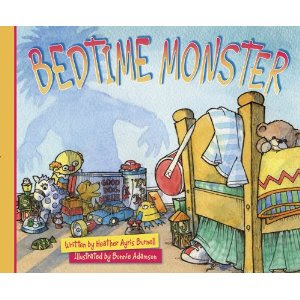 There is nothing more interesting to me than reading about someone's publishing journey! I love getting the inside scoop. How many drafts. How many months? How many queries?

So, I was thrilled to receive a guest post from Heather Ayris Burnell on her Path to Publication.

Heather's story is long, so I will split it into two parts... and her timing is great. This will save me from canceling another week of posts. Hurray!

Here is Heather's story (in black) with an occasional comment from me (in red):

My road to publication has been a lot like the dirt mountain road I live on, bumpy, with a few rocks to dodge, but ending up in a pretty good place. It all started in 2005 one night after I finally got my reluctant four-year-old son to bed. He’d been going through a time when he just didn’t want to go to bed and, well, he had been acting a bit monstrous. My husband and I tried all sorts of things to get him to bed. We rocked him. We sang to him. We made him warm milk. It was a struggle.

Brilliant! Why didn't I think of that?

I wrote the story down. Entertained myself with it a bit (also known as revising), then stuck it away in my filing cabinet, which is a bad habit I have. I thought of the story from time to time but didn’t look at it again until the next year when my critique partner, Amanda Noll, had a great monster story called I Need My Monster (Flashlight Press, 2009).

Oh! She's your critique partner? Her road to publication can be found here.

It reminded me that I had a monster story too, so I dug through the filing cabinet and put it up for critique. The feedback was pretty positive so I did some revision and sent Bedtime Monster to one publisher. (Obviously, I am not a submission powerhouse.) I got one form rejection. Then I sent a query out and waited. While I was waiting, I heard that Raven Tree Press was open for e-subs and it seemed to me that Bedtime Monster might be a good fit, so I sent the manuscript in for consideration in October of ’06. The same day I was told they were interested and was asked if I would send the story again in February when they were sending manuscripts out to readers. What a whirlwind that was. I wasn’t used to hearing back so quickly on anything let alone positively!

In January ’07 I received a letter about the query I’d sent to the other publishing house. The editor wanted to review Bedtime Monster. I was thrilled. It was my first manuscript request from a query—another milestone moment. I sent the manuscript out to both houses, and waited.

In March ’07 Raven Tree Press emailed me with an offer for a contract. I got a little bit excited! (Bwah-hahaha!) I called the other publisher to let them know. No, I was no good at any of these things. I’d never even been to a writer’s conference at this point in my life, but I called that publishing house and talked to the editor. She ultimately passed, but it was okay. I did have another offer, which I accepted (obviously). Then I waited some more.

TO BE CONTINUED...
Posted by Corey Schwartz at 11:39 AM
Email ThisBlogThis!Share to TwitterShare to FacebookShare to Pinterest

Great story, so far... Can't wait to hear the rest. Thanks to both of you for sharing.

Oh, it's cruel to leave us hanging like that! I can't wait til tomorrow. ;-)

What a cliffhanger! I love getting the inside scoop, too, but even more so, I'm just so happy to hear success stories from others in this business.

I love reading about other people's successful journey toward publication. Can't wait to read the second installment!!!

Can't wait for the rest of the story, Heather!

Guess I got a little long-winded, but it's long story!

What a great story - I'm looking forward to reading the rest!

(And you got an offer from the second person you sent it to - WOW!)

And, I LOVE hearing these. It's amazing how different everyone's journey is. I try to tell people that there's no magic formula!